To Exchange, or not to Exchange

Reading Time: 2 Minutes
A semester abroad at a different college is something a lot of us consider at least once in our time in college. The prospect of spending an entire semester at a foreign university can be equal parts tempting and terrifying – exploring a brand new country and way of life versus leaving early everything familiar behind for nearly half a year, not to mention the expenses involved. So, how many people do go for it? 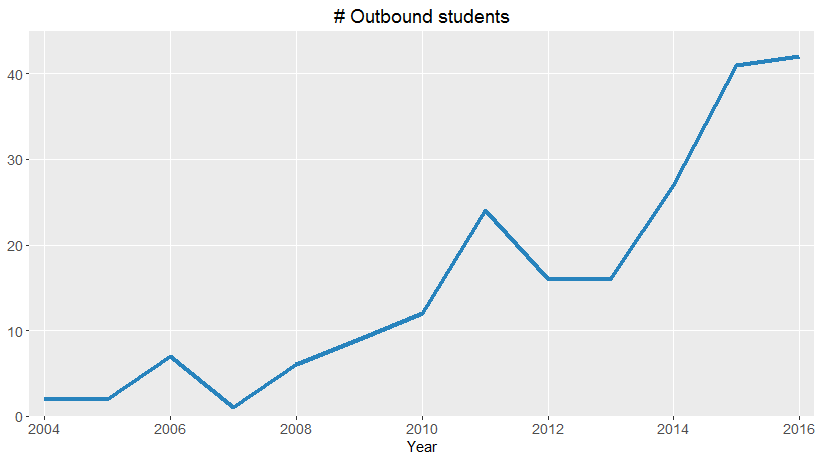 The answer: definitely more now compared to a couple of years ago. The number of outbound students across the years has shown a generally increasing trend, in large part due to more and more people getting to know about exchange programs and students having more options to choose from, given the increasing number of MoUs being signed. When it comes to universities, Singapore based National University of Singapore (NUS) and Nanyang Technological University (NTU) are the most sought after, together accounting for a third of outbound exchanges probably due to the TFlearn funding available for exchange to Singapore.
That was a general overview. Here’s a look at the department-wise and program-wise representation of students.


The number of exchange students from EE and Mech are almost equal to all other departments combined. While this could be attributed to the large number of students enrolled in these branches, the number of exchange students have been small from similar-sized departments such as Chemical, Civil and CSE. Across programs, nearly 90% of our outbound exchange population comprises of UGs, out of which Dual Degree students make up more than two-thirds.
Considering an exchange yourself? Odds are, you’re trying to figure out which semester would be best for it. We investigated to find out historical trends, shown below. The vertical axis indicates the semester of exchange and the horizontal axis tracks the percentage of total students (in the specific program) on exchange in a given semester. 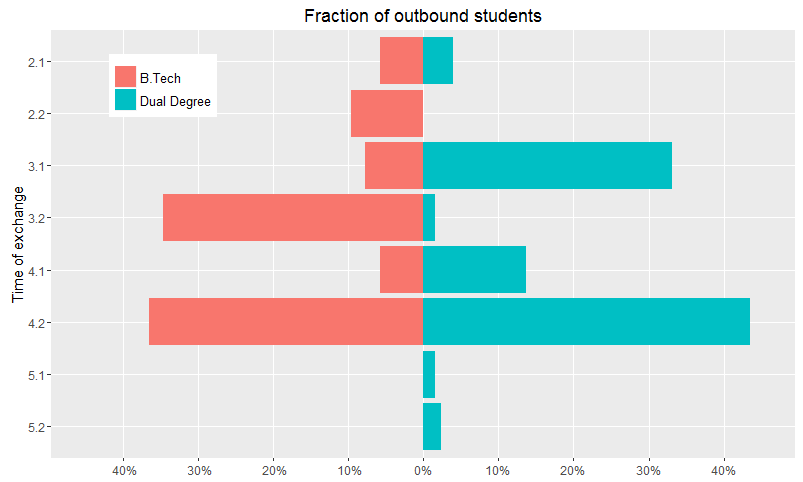 During 3.1 (the first semester of third year) and 4.1, most BTech students are occupied with career decisions and therefore, the even semesters (3.2 and 4.2) have a large chunk of students going on exchange. On the other hand, Duals tend to highly favour 4.2, followed by 3.1 which is a close second. The more interesting part is that historically, 2nd year is the least preferred, often because students are late to realize that such an opportunity exists.
For those of you who are interested to know more about these programs, there’s ton of resources available online. For starters, here is a compilation put together by the International Relations Cell, IIT Bombay.
Footnotes
1. The data was sourced from the IIT Bombay International Relations Office
2. The source code used to create the visualizations is available on Github

The Art of Data

IITB Alumni and Where to Find Them