We are a student body aiming to make a single-person flying vehicle for use in urban scenarios. We aim to achieve a flight time of 30 minutes and cover about 30 kilometers on a single charge.

Alongside urban transport, other viable applications for the device are firefighting, exploration, defense and disaster mitigation.

The increasing demand for faster transportation coupled with technological advancements is an excellent motivator to work on such compact flying technology right now. High Performance BLDC Motors, high energy-density batteries and the advent of high specific strength materials (such as carbon fibre) have paved the path to making this dream a reality in the near future. 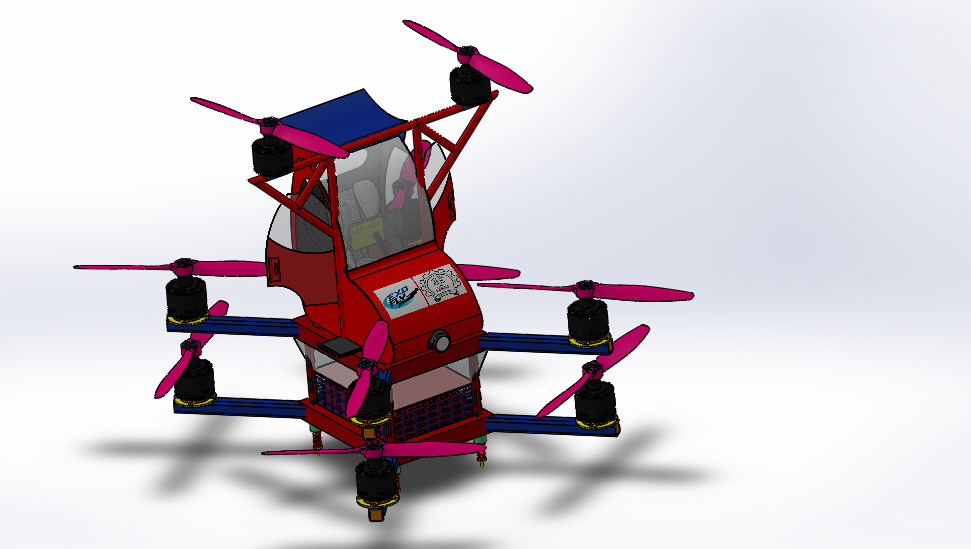 The team was started by Karan Jain of the Mechanical Department in March of 2018, under the mentorship of Professor Arindrajit Choudhary from the Mechanical Department, aiming to enter the GoFly competition organised by Boeing. The competition had a timeline of two years, being split up into 3 rounds. The first round asked for a proof-of-concept of the devices, with the second round calling for videographic demonstrations of the vehicles and the third round giving a select few teams the chance to demonstrate their vehicles in front of judges, completing various tasks.

The initial inspiration for a lot of early members in the team was the idea of being able to fly like the popular Marvel superhero Iron Man. However, such a concept was deemed impractical early in our design stages, and we settled on a multirotor configuration. Using combustion engines to propel the vehicle was not safe and left minimal chance of recovery in case of system failure. Battery- driven propellers, on the other hand, were a safer and more eco-friendly option.

We gained confidence in our design commitment to multirotors as all of the best designs from Round 1 had multirotor configurations. We were dealt a blow a few months later as the competition’s eligibility criteria changed to include only teams with corporate backing. Our lack of a marketing team at the time meant we were ineligible to compete. However, our vision to develop urban flight remained unchanged, and we decided to carry on with the project, using the competition guidelines as a loose set of target specifications.

On the structural side of things, a skeletal design for the vehicle is complete, with 10 propellers. Two of the propellers will be located side-by-side at the top, and the other 8 will be located close to the bottom in an octa-co-x configuration: four pairs of coaxial, contra rotating propellers arranged in the form of an x around the vehicle.

The load-bearing parts of the structure have been modelled, and simulations show deflections of the order of 0.1% during steady flight.

On the electrical side, we have decided to use Li-Po batteries, which have the highest energy density among other types of batteries. Lithium Polymer batteries are also safer than Li-ion batteries and are being replaced in many electronics.

We have also designed circuit boards to add to electrical safety, such as:

We have also designed and set up a testing rig in IC Engines Laboratory to measure various operating parameters of 32” propellers in CRP configuration.

During TechConnect 2019, we had a chance to talk to representatives of an indigenous company called PDRL, which is also working on eVTOL devices. We exchanged details about core aspects of assisted electronic flight such as battery management and control algorithms, among other topics as detailed below.

Energy sources with high specific energy (energy per unit mass) are preferred for flight, much like the structural members preferred for flight are those with higher specific strength, but such energy sources are typically associated with a higher rate of incidents. Lithium-Polymer batteries and Lithium-ion batteries are notorious for catching fire at extreme temperatures. They also deteriorate quickly when cell voltages fall outside operating ranges. For this reason, intensive battery management systems are indispensable to users of Li-Po batteries.

Control algorithms for drones have been around for quite a while now, but they can still be considered to be in their infancy. The reason for this is that quick calculations required for well- controlled flight are only possible through the use of linear control strategies, while the state equations for flight have large curvatures. This leads to some corner cases with inefficient, ineffective or even downright counter-productive control when oscillations or disturbances with large amplitudes are present. This calls for smart controller design with predictive aspects such as gain scheduling baked into the controller.

It is quickly apparent that for safety, redundancies need to be built into the system, whether it be from the structural, electrical or control point of view. The failure of a single load-bearing member, a single battery or a single propeller must not trigger a cascade of uncontrollable events in the vehicle. To avoid such single points of failure, redundancies need to be carefully planned.

We also took advice from the representatives about aluminium welding – a requirement of ours that proved unexpectedly hard to obtain.

Recruitment is typically opened for freshies in their second semester. Study material is provided before taking a written test for 4 subsystems i.e. Electrical, Mechanical, Controls and Marketing. Students are expected to read and understand the study material. Questions in the test mainly focus on the application of the concepts given in the material, in order to test the concept application ability of the prospective recruits.

Some students are shortlisted after the written test for an interview. The interviews have two goals – to further ensure that the recruits are comfortable with the application of abstract concepts and to test their teamwork and dedication capability.

The obvious benefit of being part of a tech team is that there are various concepts which take on a whole new perspective when in practice, and this experience is invaluable to students hoping to make a career in a core field.

Apart from this, there is a benefit in that the team members learn how to collaborate over long periods of time. When done right, they can get into the habit of documentation as well, which is another important aspect of core jobs.

Then there are other soft skills that can be learnt, with one example being the large amount of networking our mechanical subsystem had to do in order to find a reliable aluminium welding service.

Impact on the Student Community

Team members have the opportunity to work on eVTOL vehicles that are the future of transportation.

The student community as a whole will be exposed to the latest innovations in flight technology and batteries through our presentations at orientations and other events such as RnD Expo and TechConnect.

During this online semester, we plan on getting a reliable controller in place, and to analyse the vehicle from the point of view of safety. This is a wonderful time to get a firm grasp on theoretical concepts without the added pressure of producing some tangible work.

We are also doing simulations for estimating power of the battery pack. Our goal is also to find the best configuration of batteries so that the corresponding BMS is more compact.

Once we have access to the campus, we plan on putting the big motor testing rig to use and updating our controllers based on the new data received. This is important because the interaction between coaxial propellers is difficult to model and is best expressed through empirical formulae.

Parallelly, we will manufacture a quadcopter to get an idea of our competence on the mechanical and controls fronts. Depending on the results we may develop a scaled prototype or directly start work on the final device.

We are a relatively young team working on a project that has captured our fancy, and at the same time is at the forefront of existing developments in urban transport. Do check us out if you are interested in personal urban flight.