Behind The Screens : Convocation 2020

This year has already witnessed a series of unprecedented events. Especially on the academic front, our institute has been on its toes since late march to ensure a smooth and inclusive transition into the new way of education. On the 23rd of August, our institute created history by organising a first of its kind e-convocation. This wasn’t just another one of those Zoom meets but a full-fledged Virtual Reality experience with 3D Avatars of 2000+ graduating students and a beautiful Virtual Campus Tour for the batch of 2020. This technological feat has received acclaim from media both in India and abroad, including CNN and has undoubtedly done our Institute proud. More importantly, this event shall stay etched in the memories of all the graduating students who took that giant leap out of college amid a global pandemic. With this article, Insight brings to you the Behind the Scenes(/Screens) of this mega event. 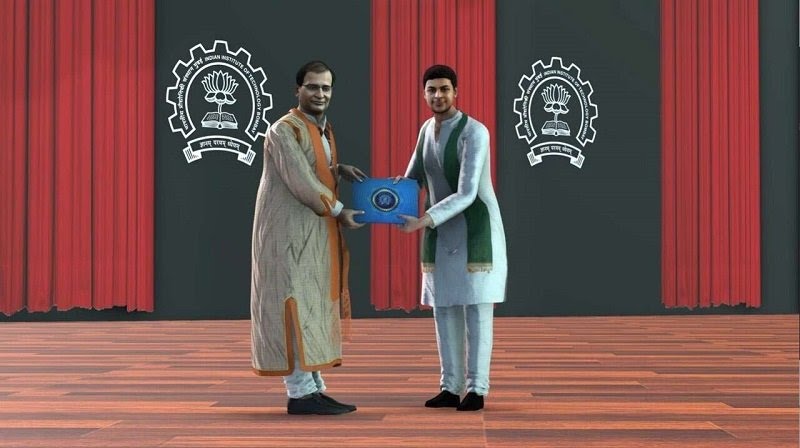 The graduating students were given guidelines about the photos, the type of background and angle. The team began working in mid-June; Some avatar creating algorithms were tried, but the avatars did not render well, and a lot of manual fine-tuning remained. So, the team decided to complete all the 3D avatars manually. Out of the 2000+ students graduating, 1500+ students submitted the photos and details in the specified format which included the front face, side face and full-body photos. Prof Sumant Rao, Prof Parag Chaudhuri and their team took the task of Creating the avatars, hand-tuning them, creating and editing videos within this short period. The team worked in close collaboration with the Convocation Organisation committee, Academic Office and Student tech teams. A very real avatar of the chief guest- Dr Duncan Haldane was also created.

Each faculty and dignitary was recorded, and the individual videos were merged into a single video. It appeared so real that there were a few complaints that IIT Bombay was not maintaining social distancing norms! This video was created using very creative video compositing; The recorded messages and talks by the chief guest, VC of Monash University and invited speakers were added to the final video, which was then broadcasted. The student avatars were delivered via android and Windows applications, loosely synchronised to become available during the live broadcast. Post the broadcast, the avatar animation links were mailed to the students.

The entire ceremony was also broadcasted on YouTube and two national channels. Prof P Sunthar took the task of managing and integrating the tasks of several disjoint teams working towards a single goal- making the Convocation 2020 unique and memorable.

Every year, the convocation ceremony is followed by students roaming around the institute, visiting their favourite spots, catching up with friends, interacting with professors and so on. This year around, however, that couldn’t happen. To give the graduating students an almost similar experience, the institute organised a Virtual Campus Tour on Gather (https://gather.town) Gather is a unique video calling platform that lets you navigate on a map and interact with people as you walk around on the map. It also has the feature of creating rooms with interactive elements. The project was led by Professor Varsha Apte and the General Secretary of Technical Affairs, Anirudh Mittal with a team of about 75 students including representatives from different departments, hostels and extracurricular clubs. Conveners of the Institute technical Council, Vedant Chanadak & Bhuvan Agarwal, were responsible for smooth integration of map elements.

The team first got in touch with the founders of Gather and proposed the plan, sometime towards June end. This was followed by the creation of a digital map of the institute. There were a couple of demos and test runs with the professors and students. On receiving approval from the convocation committee, sometime in the last week of July, the plan scaled up further. Within the map, different rooms were created, which represented the various hostels, academic buildings, SAC,  Gymkhana ground and other places in the institute. With the help of hostel, department and club representatives, the maps were created, and interactive elements such as pictures and videos were incorporated in the rooms. Given that this was an absolutely new concept and project, the team did face inevitable delays and issues too. It involved coordination between 75+ representatives from various hostels, departments and institute clubs and bodies.

The virtual presence was divided into two slots starting with the first one on the eve of the convocation where different maps for different hostels were shared to keep the institute map a secret.

On the final day, the virtual tour began right after the convocation ceremony at 5 PM). The event was being monitored via a virtual control room with members from the organising team and Gather founders, to ensure a smooth run. For 45 mins at the start, the server faced some issues, but it was resolved within half an hour, and the tour resumed. It also became open to non-graduating students at around 9 PM and was undoubtedly a one of a kind experience.
Here are some interesting statistics regarding the Gather meet:

While the last few months have been full of doubt, anxiety and uncertainty surrounding the future, this unique convocation came as a much-needed respite. Although nothing can match the warmth of an in-person convocation day, the efforts put in by the institute to make the day a memorable one are truly commendable!

Here’s a list of all the professors, technicians and artists who contributed to this project along with their respective roles:

Composed along with: Nikhil Bapat (Drums) and Aditya Dev (Guitar)

Mixed and Mastered by Ariel Samson at Benchmark Studios

The S grade and its global counterparts

EC come, EC go. Will you let me vote?