Amendments to the SAC Constitution

The content on this website is strictly the property of Insight and the Students’ Gymkhana IIT Bombay. If you wish to reproduce any content herein, please contact us:
Chief Editors: Saman Siddiqui and Varun Sule
Mail to: insight@iitb.ac.in

A meeting of the Student Affairs Council (SAC) was held on the 27th of March, 2019 wherein some major initiatives and changes in the Gymkhana constitution were ratified, with all points coming into effect this year. Attendees of the meet included the Director, Dean of S.A, General Secretaries, Overall Coordinators of IBs, SMP coordinator and the DGSC and HGSC nominees.

Policies concerning students were discussed and significant alterations to the SAC constitution and selection procedure for various student bodies/councils were made.


The major agendas discussed and changes that took place are as follows:- 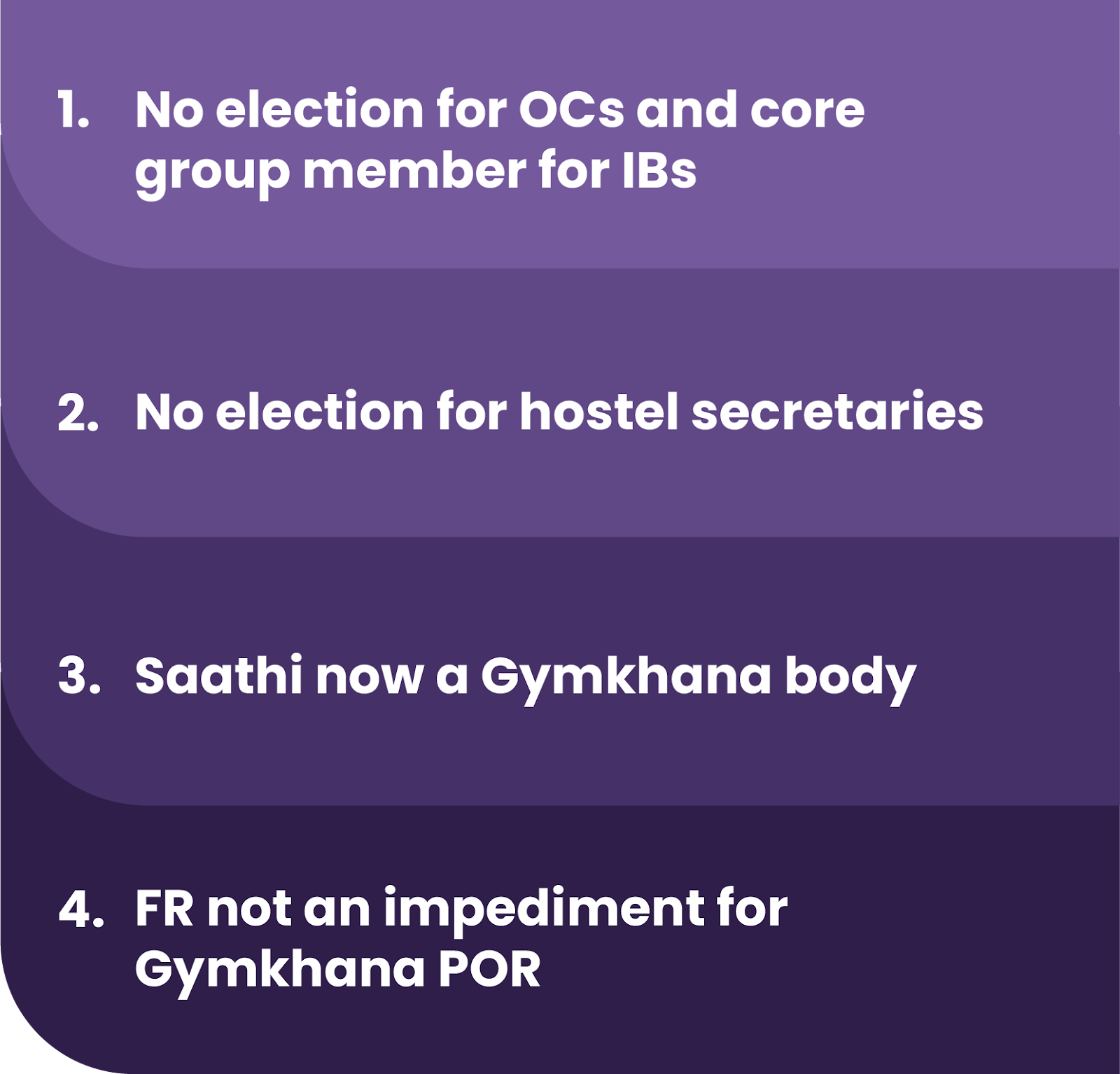 Approval of revised SAC constitution (covered in detail below)

> Modifications in the eligibility rules for Gymkhana Office Bearer

> Modifications in the eligibility criteria for Gymkhana Awards

> Modifications in the constitution of Saathi


> Changes in the selection procedure of :

> Modifications in the composition of: :

Modifications in the constitution of UGAC


Changes in the responsibility of the Returning Officer

Admin Connect Portal –  proposed as a medium to connect the student populace with the institute administration, to improve transparency.

Explorer’s Fellowship – in the institute for first-year students on the same lines as a program in IIT Gandhinagar by the same name. It has been approved in principle.

Proposal to help Differently-abled People in the campus –  Provisions to make our campus more specially-abled friendly were proposed and approved in principle, pending submission to the Dean S.A. for further action

> Modifications in the eligibility rules for Gymkhana Office Bearer

Students with less than two pending academic backlogs with a CPI of 7 or more will be permitted to hold Gymkhana positions.

> Modifications in the eligibility criteria for Gymkhana Awards

– Students found guilty in single offense in DAC or more than one offense in WDC will be ineligible for the respective institute and hostel gymkhana awards.

– The Roll of Honour and Citation should be considered for the entire duration of stay in the campus for respective institute and hostel gymkhana awards.

– In order to recognise the efforts from Insight body, there will be an addition of one journalism color and one journalism special mention under gymkhana organizational awards.

> Modifications in the constitution of Saathi

An official body for the LGBTQ community was long overdue. Now, Saathi has been approved as a recognised Gymkhana Body. There will be one Saathi nominee each in Hostel Affairs Council and Cultural council who will represent Saathi in the institute.

The need of having an institute level student community that works actively on student-drive projects catering to a large portion of the student populace has often been felt by the student councils. It was proposed to instate this committee with the requisite set of policies and was approved by the committee. All major gymkhana websites will be developed and standardised by DevCom.

> Modifications in the composition of :

– SGEC
Overall Coordinators of IBs and Insight Chief Editors will be removed from the SGEC and will be invitees to the meeting according to the requirements of the agenda.

> Changes in the selection procedure of :

a. The Hostel secretaries will be nominated through an interview process by a panel consisting of General Secretary, Hostel Councilors and previous council members. The election for the same has been removed.

a. The Overall Coordinators will not be appointed through the election process.

c. Selection will be through an internal electoral process followed by interviews in front of a panel consisting of the Dean of Student Affairs, Associate Dean SA and other invitees.

– Department Councils
The student representatives (which includes the Department General Secretary and the UG/Master/Ph.D. representatives) have to be necessarily elected. The rest of the positions can be nominated. The process was approved by the committee.

> Modifications in the constitution of UGAC

The scope of UGAC will be extended to include all the students under programmes that are covered by UGPC.

> Changes in the responsibility of the Returning Officer